Save the American River Association believes that the occurrence of illegal camping in the Parkway would likely be reduced if adequate housing and services were available as an alternative. However, SARA firmly believes that lack of such housing and services does not justify cessation or reduction of efforts to enforce illegal camping ordinances in the Parkway so as to achieve and maintain the community standard embodied in the Parkway Plan. Our community must do both and must not use the Parkway as the proverbial rug under which to sweep the homeless problem.

"I have been walking in the American River Parkway daily for over 10 years and have become so dismayed by what I have been seeing that I chose to make an 8-minute documentary video about it. I hope this video can help spread the word about the degradation of this beautiful space. Please share it if you are inspired and encourage our local leaders to act. We must house the homeless in a clean, safe location so that we can clean up, maintain, and enforce laws in the parkway. These videos were taken over three weekends in November and December of 2019." - Video by Tony Mader

In mid-December, the U.S. Supreme Court refused to hear a major case on homeless campers.  Without comment or dissent, the justices let stand a 9th Circuit Court decision from Boise, Idaho, last year which said homeless people have a right to camp or sleep in public places if no other shelter is available to them.

As a result, law enforcement will continue to have few options for removing homeless people from parks and public places unless they are involved in criminal conduct.

The City of Sacramento and Sacramento County were among dozens of municipalities that filed the appeal with the Supreme Court.  They argued that the broad nature of the Boise decision made it difficult “to balance the needs of its homeless residents with the needs of everyone who uses public spaces.”   Prior to the Boise decision, for example, the City of Sacramento allowed homeless people to camp on the City Hall grounds at night.  But they had to leave during the day.

The homeless population in the Sacramento County area now numbers more than 5,500 people and it has been growing.  Despite expanded efforts to provide housing and services to homeless people in the area, local officials say there will never been enough resources to serve all who need help.

Gov. Gavin Newsom has repeatedly noted that many homeless people have drug or alcohol problems, or suffer from mental disorders such as bipolar disorder, schizophrenia or paranoia.  “Our homelessness crisis has increasingly become a public health crisis,” the governor said.

Sacramento has a Pathways to Health and Home program that identifies people who frequently visit emergency services facilities.  The staff pairs them with community health workers who help clients schedule medical appointments, get help with addiction and enroll for public aid.  They also help them apply for jobs and find housing if it is available.

Twelve other California cities have programs similar to Sacramento’s and they currently receive federal funding.  Gov. Newsom has committed the state to help fund the programs. 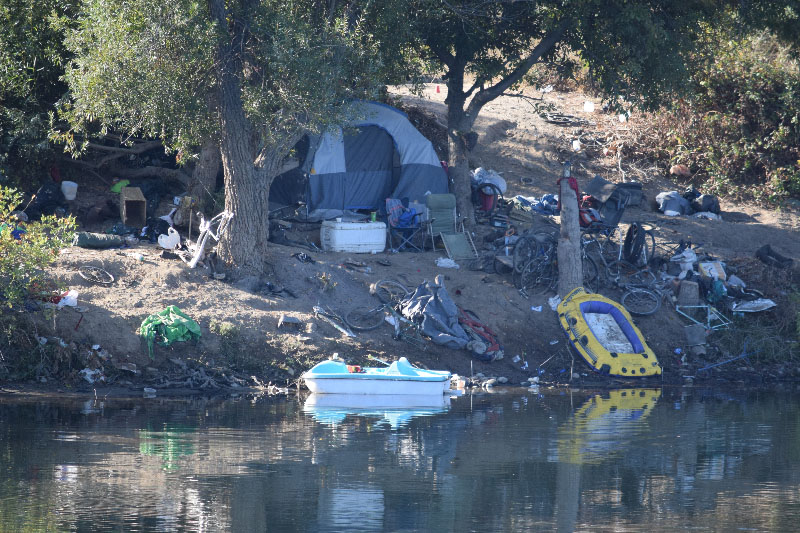 The camp pictured above (photo taken October 2017 by George Nyberg) is not about people needing a place to rest their heads at night. For the last two years, this camp near the water treatment facility by Sac State has operated as a bicycle chop shop. We look forward to seeing this camp gone now that the County Supervisors have approved an additional 5 million dollars to help augment our numbers of Park Rangers. Please report camps to Sacramento County 311. The Rangers will know where to go to clean up problems and County Parks will continue to collect good, hard data regarding the type and size of illegal campsites on the American River Parkway.