E.coli in the American River

Water tests have been conducted every Saturday at Tiscornia Beach at the mouth of the American River since July 2020 by three retired university professors. Once out of the rainy season, the tests have consistently found E.coli bacteria levels that exceed U.S. Environmental Protection Agency standards for safe swimming.

“E.coli represents risk of disease because it comes from feces which can carry any number of diseases from infected people, including Shigella dysentery and Salmonella,” said Robert Metcalf, professor emeritus, Biological Sciences, Sacramento State University.  “EPA recommendations for swimming water set 320/100 milliliters (3.2 per one ml—about 1/5 teaspoon) as the maximum acceptable level of contamination. Our tests show that that level is regularly exceeded at Tiscornia Beach. Testing done by the state Regional Water Quality Board confirms our findings.”

“Hundreds of children use this beach and they are most vulnerable to swallowing contaminated water,” said Mary Beth Metcalf, MD, retired Clinical Professor of Pediatrics, UC Davis.  “The elevated levels of pollution at Tiscornia Beach greatly increase the risk of disease.”

Media Alert: Water at Tiscornia Beach in Discovery Park is Contaminated and Unsafe for Swimming (June 12, 2021)

The Sacramento Bee - May 28, 2020
American River in Sacramento still tainted with feces, despite new parkway bathrooms
By Ryan Sabalow and Theresa Clift

The Sacramento Bee - September 12, 2019
‘What diluted sewage looks like.’ American River in Sacramento tainted with feces
By Ryan Sabalow and Vincent Moleski

The Sacramento Bee - October 11, 2017
Folsom Lake and Lake Natoma had high E. coli readings. Should the public be warned?
By Brad Branan

Is the Lower American River dangerous for recreational users?

Having noted recent media reports concerning E.coli presence in the Lower American River (including “Lake” Natoma), SARA members and other users of these waters are asking for more information. Is the river safe for water sports or not?

The best answer is: some of the time and in many places, yes.  But there are times and places for which the answer is less certain and, to be on the safe side, “no.”

What are the basics that water users need to know about the bacterium E. coli (Escherichia coli)? It is frequently found in nature, and NOT NECESSARILY DANGEROUS.  When located (easy to do) in public waters, it is a “marker” that something is wrong—that at least in small quantities the water has been contaminated by the feces of warm-blooded animals. (Human feces contain, for example, huge concentrations of E.coli.) The presence of E.coli in recreational waters  does not necessarily constitute a public health threat. It does, however, when found in higher concentrations call for the attention of appropriate public agencies. Since the presence of the bacterium at higher levels suggests that something has gone wrong, the realm of politics and the assignment of responsibility emerges.

Recently reported LAR studies by the Regional Water Quality Control Board (performed at multiple locations in the river from 2008-2014) have disclosed unacceptable (and likely dangerous) amounts of E. coli (exceeding “Safe to Swim” levels) at multiple locations both downstream and upstream from Nimbus Dam (at Hazel Avenue). Likely causes are large illegal camper populations, other animals including birds, and leakage from over-burdened and out-dated urban sewer systems.

How can the user tell when to enter the water or not?

Currently, no public agency at any level admits to the responsibility of notifying the public of unsafe conditions.

What agencies are responsible, and how do we reach them?

Various water districts serve the large population downstream from Folsom Reservoir.  All are responsible for testing drinking water sold for public distribution, and presumably treat it accordingly. Our concern here is not with drinking water that comes from the tap. That is a different story, which needs to be considered and told elsewhere.

The Central Valley Regional Water Quality Control Board is the state agency responsible under the Federal and State clean water laws for keeping the waters of the United States and California clean and safe. With many responsibilities other than the Lower American River, they have in the past and are renewing a systematic study of E.coli downstream from Nimbus. This is a step in the right direction, but in our opinion seems to focus on the homeless population downstream, and leaves the heavily-used Lake Natoma waters without official scrutiny.

Contact: Adam Laputz, assistant executive officer of the board. The number is 916-464-3291. Also, call your state legislators. Tell them of your concerns, ask for better public outreach, and if you love and use Lake Natoma, ask that the currently planned study be extended upstream.

In past years, county health conducted regular studies of E. coli in the local recreational waters. They stopped these investigations years ago, claim currently to rely on medical reporting of those actually sickened by water-born bacteria before taking action.  We believe this Department should be responsible for public notification of “Unsafe to Swim” conditions at heavily used locations plus media outreach.  Clearly, if county health cannot or will not undertake E.coli studies, they should communicate effectively with the Regional Board.

We are a voluntary agency serving as guardians of the Lower American River and the Parkway since its/our establishment in 1961. We were among the groups active in the 1980’s to establish the Regional Sanitation District, thus putting an end to the long-used process of dumping untreated sewage into the river itself, instead diverting effluent to a central treatment plant.

Alan Wade, professor emeritus, Social Work, Sacramento State University, noted that if tests found E.coli pollution at a coastal beach at the elevated levels detected at Tiscornia Beach, the beach would have been shut down months ago.

“Save the American River Association has been urging local officials to close Tiscornia Beach or at least post easily seen and read signs on the beach warning beach users,” Wade said.  “But those requests have been ignored.” The sign that has been posted at Tiscornia warns people not to drink the river water.  But the sign is faded and the print is small. “The sign is easy to overlook when entering the area,” Wade said, “and it totally misses the mark of conveying accurate information.”

SARA has been sharing the results of their weekly water test with Sacramento County and the state Regional Water Quality Control Board. The state board plans to do further studies to help identify the source of the fecal pollution of Tiscornia Beach. 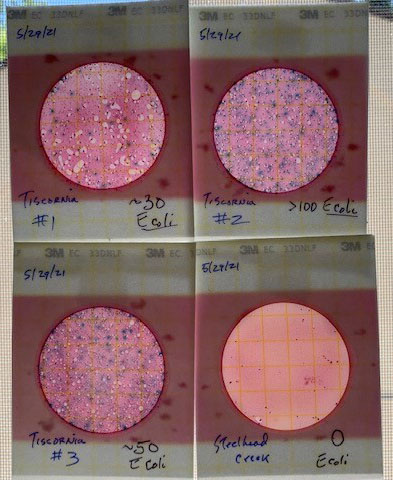 These Petri films were inoculated with water from Tiscornia Beach collected on May 29, 2021. Each blue dot represents one E. coli -- bacteria that indicates recent fecal pollution is present. Water samples from Tiscornia Beach usually have E.Coli that exceeds the EPA standard for safe water. On this day, the beach was exceedingly polluted. 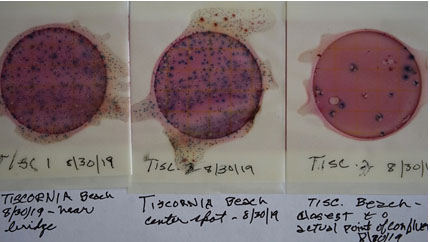 The lower number in the right hand photo comes from a sample at the actual confluence, where the diluting effect of the Sacramento River comes into play.  The first two are estimated at >70 and the second at >100.   Note that the SWAMP sample taken on Tuesday prior stood at 2419.60 the familiar maximum measurable by the Colilert® method.  Our actual count a few days later comes out at least three times the 2419.60 figure (i.e., 70+ multiplied by 100=7000). Even higher if the colonies could be counted in the second photo.

or
Please check your e-mail for a link to activate your account.